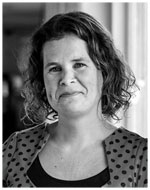 After graduating from Theatre-, Film- en Television Sciences at University Utrecht in 2003, Ellen worked as a Production Manager and Line Producer for various production companies producing short films, drama series and feature films. Working for Column Film she was the Delegate Producer of 170 Hz ( first feature film by Joost van Ginkel) which won the Golden Calf Audience Award and the Movie Squad Award at the Dutch Film Festival 2011 and got selected for important international filmfestivals such as Busan, Seattle, Shanghai and Moscow.

She attended courses such as European Co-Production: Legal and Financial Aspects at the Erich Pommer Institut and Story Editing by Franz Rodenkirchen at the Binger Filmlab. In 2010 she participated in the Rottterdam Producers Lab and in 2012 in the prestigious EAVE – European Producers Workshop. In 2015, she was chosen to represent the Netherlands as Producer on the Move at the Cannes Film Festival 2015 and was selected as a participant for the Atelier du Cinéma Européen programme (ACE). She is an EFA member.

After finishing her MA degree in Cultural Anthropology (subject: women filmmaking in South-India) at the University of Amsterdam (UvA) in 2005, Amrita lived in Bombay (India) for several years. When she returned back to Amsterdam, she worked as a post-production producer for four years followed by a period of freelancing as a production-assistant on several TV commercials in the Netherlands.

Amrita joined PRPL in august 2015. Since then, she gained experience in international filmmaking, mainly as post-production supervisor. In February 2018 she participated in the 6-day post-production workshop EP2C (now A Post Lab) in Budapest, Hungary. Next to her focus on post-production, she is responsible for a broad spectrum of tasks such as all-round production assistance, publicity & premieres and office management, among others.