Muis gathers her sisters Ted, Carlos and Lian around her when her lung cancer is stated as terminal. Powerless, with great humour and in deep sorrow they struggle with the inevitable. Between loving gestures and endearing atte
mpts to make most of life while it’s still there, rough edges of the sisters’ characters are uncovered. The differences between their four personalities surface when they try to prepare for the irrevocable loss they are facing. They deal with the upcoming death silently, witty, unreasonable and loud, painfully honest, together and alone.

Frailer tries to grasp their journey by exploring the boundaries between fiction and reality. It captures the way we face death and shows the anguishing realness of an involuntary farewell. It makes Frailer an unforgettable honest film, unlike a film you’ve ever seen before. 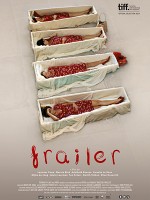